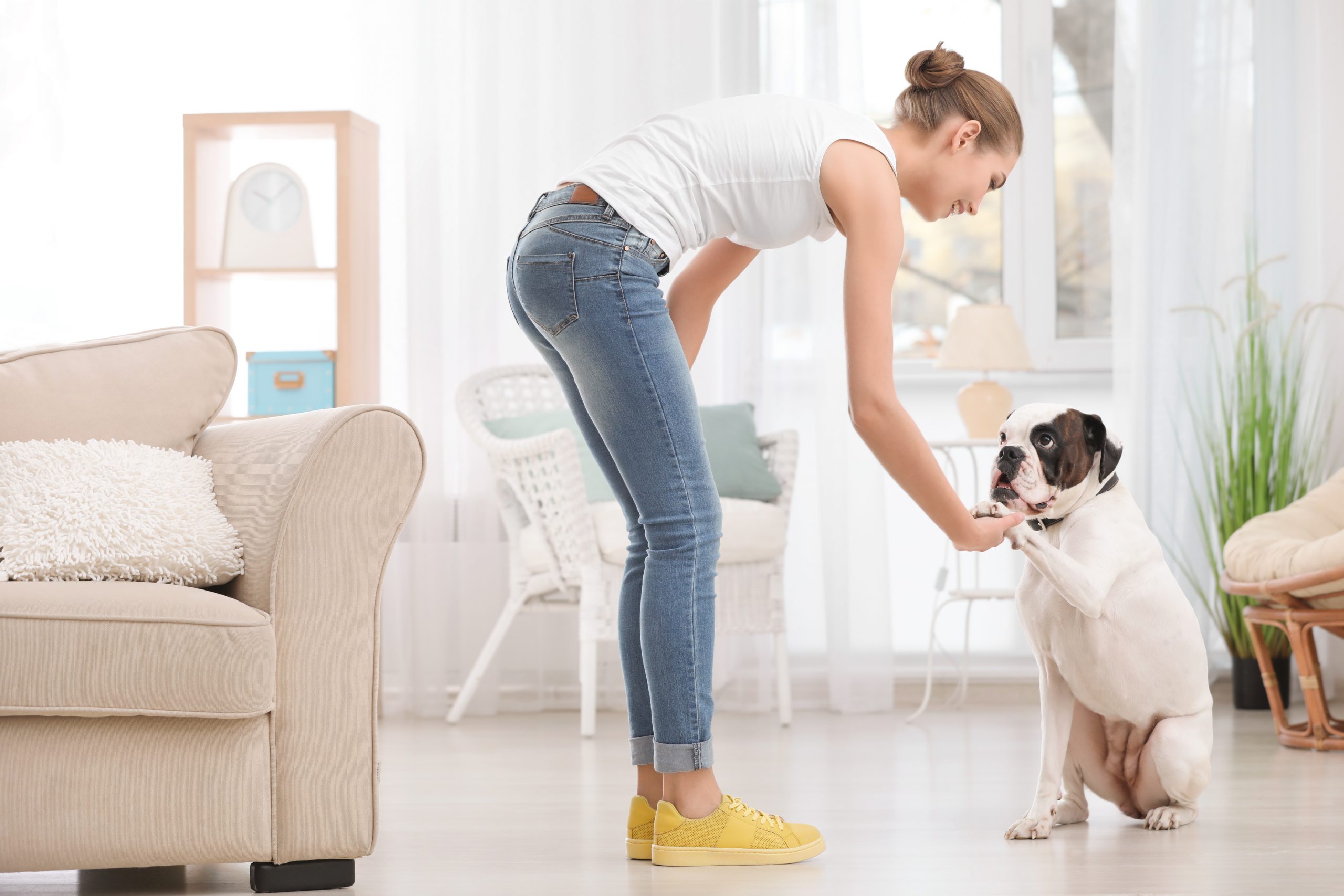 Most would agree that the day you bring the Boxer puppy home, you must already pick the direction in which you want to go with him.

Disciplining one is a matter of thinking and working a step ahead of your Boxer. Do it with love, gentleness but firmness as well.

Also, a Boxer that is well behaved today may not remain so forever. Dog’s behavior constantly changes; new problems can always develop, and existing ones could get worse. So make the discipline constant.

Training your Boxer is the most important thing you will do for him and for yourself in order to have a much better relationship together.

A trained Boxer will listen and can safely be allowed freedom more than an untrained one.

A disciplined and well-trained Boxer is more confident and makes a wonderful companion that is smart, soulful, most people-oriented dog and blessed with boundless energy – a pleasure to live with.

A poorly trained dog can be a loud and destructive nuisance around the house that weighs on you more like a commitment and responsibility rather than a blessing.

Teach them young when the Boxers don’t know any better rather than stressing them out when they are older and more difficult to control.

Start the training someplace that is familiar to your Boxer, where there is a minimum distraction.

But remember, socialization is also an important part of the training because you don’t want to end up with a very shy Boxer.

So after both of you are skilled at several obedience commands, start taking him to different areas for practice, where there are increasing amounts of distractions present. Examples are near a supermarket, a busy parking lot, and a busy park on Sundays. This may seem like starting all over again, but you’ll have a superbly trained dog at the end of it. So it’s worth the effort.

Keep in mind Boxers are intelligent. Being an intelligent dog has its own advantages and drawbacks.

They are quick to learn.

It also means Boxers have a mind of their own that would sometimes show up as stubbornness. Thus, they can be harder to train than most other dogs due to their independence.

Understand Boxer’s intelligence/stubbornness, handle it well, and you can avoid problems in disciplining and training them.

As owners, you must maintain respect between you and your Boxers. Respect goes both ways.

Respect their intelligence. Love them. Set the rules for behavior. Trust them. There is no need for extreme measures to show Boxers that you are the top dog.

Handle their hard-headedness with patient and don’t give up on their training.

And because they are stubborn, conventional obedience training may not be the most effective way to get them to listen to you.

Conduct “play training” where the training tasks are made into fun games, and the Boxer’s high play drive is used as motivation. There are a lot of really good blogs available on this type of training.

Basically, Boxers are intelligent and could be stubborn. So you have to outwit them!

While training your Boxer, you have to make him WANT to do what you want him to. You can’t make him do stuff unless it is FUN. Otherwise, you are wasting both your time and his.

Boxers LOVE to play! You will have the happiest Boxer in the world and most obedient if you will just spend some time giving them your undivided attention every day. Otherwise, they feel ignored, bored and will tear or chew things up and will not listen to you.

Some tried and proven tactics you can use to make your Boxers listen to you more.

When playing with your Boxer puppy, play at his level.

If play is encouraged at ground level, this builds your role as the dominant or top dog when you are standing and training your puppy. If the puppy is allowed to jump up and initiate play, then this can lead to unwanted jumping up as the Boxer gets older.

From the very beginning, make sure your Boxers know you are the master.

However, it suffices to teach your Boxer to obey simple commands of raising a paw in a handshake, giving a hand lick for a kiss, or doing a rollover to show his submission to you. Most Boxers love performing these simple tricks (obedience commands) for you.

There is no need for extreme measures to prove you are the boss. Obedience training should be fun and rewarding for you and your Boxer.

Once it is established you are the boss, one owner declared:

“Life with your Boxer will be just kidney bean dancin’ all the way!”

“My Boxer wanted to be class clown at obedience class until I got serious and showed him I was the boss.”

The Boxer must always eat after you do.

This is the easiest way to show your Boxer who is the boss. But this is easier said than done when there are many people in the family and not all would respect the rule.

It is best to have many short 5 to 10-minute lessons than a single, long 30-minute lesson. Keep the training session short and sweet. A lengthy session easily becomes dull, boring, and tedious for both you and the Boxer.

Start the training at quiet places familiar to your Boxer with very few things and people around to distract him.

Gradually move the training to places with more and more distractions so he will learn to obey your commands despite the distractions.

Speak to your Boxer strongly but not in an angry voice.

Be kind but be firm while training and never give in to what they want. It seems cruel, but in the long run, you will have a much better relationship with your boxer.

Celebrate after every training session for a good job done.

Have a big play by running and throwing his favorite toys. If you give them a lot of playtime with yourself, they will listen to you more.

Use only one word like “sit,” “down,” “drop,” and “stay” when teaching Boxers commands. For example, when your Boxer gets on the lounge with you, say “sit – down,” and he should sit then lay down on your lap.

To keep a Boxer from charging the front door, put up a door/gate that he can’t see through or hop over.

Have him wait till people enter and come up the stairs, and then he gets a treat. This particular owner noticed that even when the gate is left open, the Boxers don’t usually go by unless they see a squirrel or cat!

Finally, no matter how well trained you think your Boxer is, he has an attention span of seconds!

Don’t let him run away because he’ll just keep going and going. Always keep him leashed outdoors if not in a fenced area.  He can run faster than you, and you will not catch him if he runs for the road.

Discipline is one of the most important aspects of owning a Boxer.

Puppy school is not an option; it is a necessity to train owners, including children in the family, how to manage the Boxer and nurture it into becoming a well-adjusted member of the family.

Puppy school is for the Boxers to help develop good habits right from the start. Wait until your Boxer is at least 6 months old before putting him through any serious work.

Trainers with extensive experience and knowledge can deal with just about any behavior problems your pup might come up with.

Choose a trainer who is purposeful and patient. The well-trained Boxer is a sight to behold going through his paces in the class. Their innate intelligence makes many Boxers great successes in the obedience ring.

Of more importance is for you as an owner to continue to practice the obedience lessons with your Boxers.

They will best remember the lessons when you incorporate them into your everyday routines with your dog.

For example, you can tell your pup to “heel” while he follows you around the house and to “sit” and “stay” while you prepare his dinner. As your wake-up greeting in the morning, he can do a “rollover.” Tell him to “go find the ball” while you get dressed and “go get the leash” before you go for walks together.

Of Leash, Harness, and Crate

This is worth repeating. Your Boxer should not be allowed to run loose outdoors. He has a short attention span and runs faster than you.

Though extremely tolerant of children by nature, a Boxer’s effusive greeting could scare a small child. He could run into not-so-pleasant encounters with other dogs from the neighborhood or worse mishaps like road accidents and poisoned stuff.

So exercise or play with your Boxer in a fenced area or on a leash.

If you like to pull or stray while going on walks, opt for a body harness. The chain-harness combo looks good as well as trains the Boxer to walk without pulling or straying.

A harness is also the answer to the Boxer slipping out of the collar. And a properly protected screen door is the answer to one that is prone to unexpected house exits.

At home, a crate for your Boxer puppy can be his safe haven, a place where he retreats to for rest.

It is not a prison. Place it in a warm corner, away from the draft, cold, or summer heat, as Boxers are sensitive to extremes in temperature. Leave the crate door open, and your puppy will usually enter when he wants to rest.

The crate is particularly useful when you are going out, leaving him alone for a while. Then you don’t have to worry so much about your Boxer chewing up the furniture or electrical cords in the house. The crate is also an excellent house training aid, as the puppy doesn’t like to soil his crate.